I’ve journeyed back to just around the corner from where all those Helium Sphere memories happened. You see, for just around the corner from that once matrimonial home, lives that rare gift, old friends. They are still in the same place I left them. Oh, the kids have grown and are becoming successful young men. The vehicle they drive is different, and of course they are older.

We talked and laughed, and slowly I realized how healing it was. How liberating it is to feel I was amongst those who genuinely cared about me, and knew me, knew some of my stories first hand. For so long it seems I’ve been pushing the reset button so often, that I’ve even become confused about who I am, what my stories are. I’ve had to regroup and start afresh with new friends, and every time I have felt that longing for those who know my back story.

Not to say that my life is so special. Rather that I miss being with those who probably know more about me then I do. And old friends genuinely want to know what you’ve been up to. Which meant of course I had to talk of Tim, which I don’t find myself doing, except for here.

Saying the things out loud that have for so long only resided in your head, well, it does help to release those thoughts. It’s akin to holding your farts, eventually you’re bound to explode. If what ye be filling your gut with be foul, then all the gunk you ingest will linger and then the foul will fester and become rather rank.

These are the friends that always seem to know just the right question to ask you, because they know the answers already, but just want to hear you say it. These are the friends you can leave behind, and walk away from for over a decade, but even so they will embrace you in friendship. Because, really, all you had to do is call them…but for one reason or other didn’t.

Tick, tock, tick, tock, goes time. But by somehow bending space, they arrive to pick you up, just when you needed a ride forward.

After a time, once the laundry’s been sorted, you move on. Like a well-worn pair of shoes, they take you to all the places you love to go. Conversations, brain-storming, ideas, and before you know it, you’ve had 3 beers and the happy glow you feel has absolutely NOTHING to do with the alcohol.

Afterwards, walking down streets I’ve been down SO many times in the past, I realize I have a strut in my step. Dusk has just fallen, and I have to work in the morning, but I have plenty of time. In that moment, I couldn’t help but think back to those Helium Sphere days. Back long ago when I was married, and I had a garden of my own, and a life I thought was just fine the way it was. Yet dark clouds had been looming for sometime, and as blind as I choose to become, it would not stop the deluge that was to come. Once my ex had lived with the loss of his bestfriend, once our marriage had started to crumble at the seams, he just lost all strength to fight, and his painful childhood ROARED in order to be FINALLY heard.

I’d known, somewhere inside myself, I’d known that once he was finally ready to deal with his childhood horrors, that we would be done. My job was done? Perhaps. My Mom was instrumental in that though, all for the good. It was to her that my ex first shared his childhood memories, for Mom knew that the first boundary he needed to cross was his forgiveness of his Mother.

Mothers don’t always do exactly the right thing, but they don’t always have many choices either. My Mom taught him that. When you can’t go home, when your own Mother tells you “you made your bed, you lie in it”…when you go to your family for help getting away from this violent man. What can a young Mother of 5, with one on the way (my ex), well what does she do? This is the 60’s after all, and there was no social services, nor woman’s shelters to turn to.

Well, maybe you allow that man back into your life so that you can feed your children. My Mom helped him to understand that. To understand that Mom’s are not perfect, but they love you and by god, you can deny that all you want, but forgiveness will set you free. 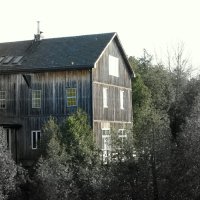