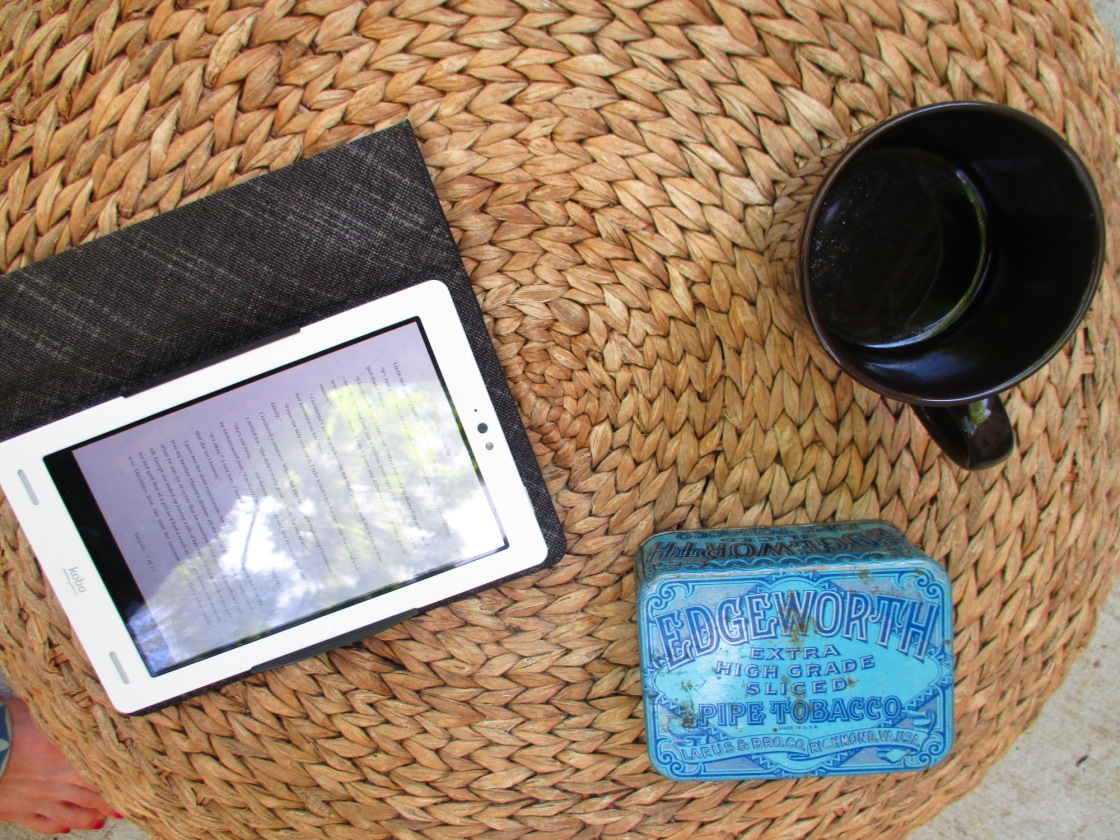 The Merit And Meaning Of Unexpected Moments

Coffee, Kobo & tobacco, thus this weekend was spent in happy hours. With planting of Bleeding Hearts bought from the Annual Gathering On The Green to mark the spot, and much lounging within the space carved out within this in-between sidewalk garden. And, in between the lounging and puttering out-of-doors, I washed floors and dishes indoors. I burnt incense, and smudged whatever smidges of negativity that may have lingered. The canine was cruised round the village a few times to sniff the “news”, groceries were purchased, and dinner/lunches for the week were created from rice and beans.

I let nothing get in the way. Neither Crossroads Man calling Saturday to let me know of my fav bands playing downtown that afternoon, nor Sunday when he dropped off the Jade Elephant he said he found (whilst cleaning up or off something or other) dissuading me from my sole objective – solitude – of which I desire as much as he. 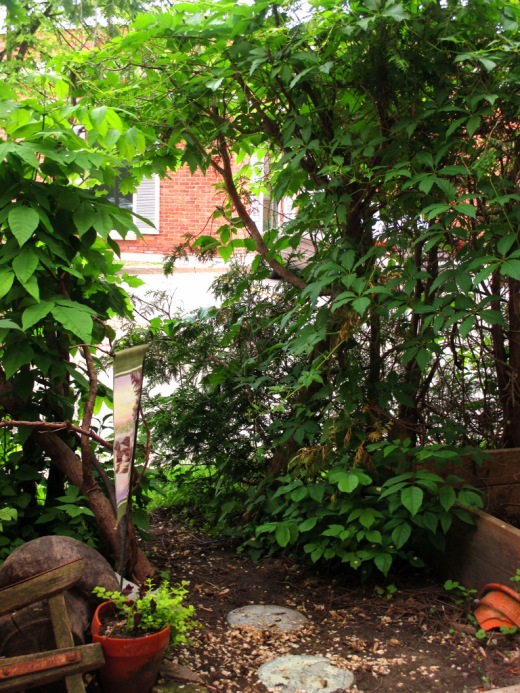 Standing there at my fence row this last Sunday afternoon, underneath the archway of Virginia Creeper, he on one side, I on the other, he on the pavement, me with my feet in the dirt, and he began to explain where he’d acquired this lovely carving I now had in my hand.

Nope. Even when he said “I found this the other day, and thought of you“.

Nope, not even then.

I did not, can not, and will NOT, could not be the one to acknowledge what I saw that day, not even yet a week before, behind his gray/blue eyes the day I set him free.

That day, after my brief and pointed phone call, no I didn’t question him that same day as he walked back to his bike after collecting the two dozen or so beer cans that had collected o’re the two or so months.

And as he turned away and said “no, I’m very happy with this, I didn’t react. I told him we were through, and practical guy that he is, he came over to fetch the cans, as he knew damn well they’d just sit in that old tin drawer till…well, till god knows when.

Ok, so apparently I did what he could not do. Sounds familiar? He said he’d wanted to end it, but couldn’t though because…dun dun dun daaaaaa….cause he’d hurt me. I guess. Least I would imagine that’s why.

Like, duh, it wasn’t obvious or nothing that he was alittle bored with the whole girlfriend thing. I mean, I’m not OCD or nothing, but returning ones calls is just common courtesy, right? Landline man that he is, he’s a primitive. No Cell. If he’s home you talk to him…well, maybe.

So, it had been four days since that day I cut ties, and I’m not sure what he’s up to with this unexpected new elephant I have in my room (appropriately perched between my entrance way and my bedroom, as per Feng Shui).

I didn’t end it with him Mom cause I was angry, and I wasn’t even especially hurt at the time. Sure, after calling him that morning and then seeing him ride off from the Bank later on, I knew he was ignoring me. After that long walk I took around the river, at some point, standing along the bank, I knew in my gut we were through.

And now I am bewildered by this unexpected gift.

So after he left me to my own devices on Sunday, rubbing my thumb along the soft Jade underbelly of this surprise, I turned my thoughts towards the rest of my collection, and wondered how best to display my newest pachyderm.

Holding it in my hand, I could sense the cool and gentle spirit, like a soft afternoon breeze on a humid day. So first up on the agenda was to google ‘Jade Elephant’, and that’s what caught my breath.

Jade elephants symbolize the ability to strengthen the union of a romantic couple, protect a home, inspire intelligence, dignity, longevity, vitality, power, strength, wisdom and prominence, and grant wishes. The jade elephant is the representation of the head of a household or business. According to Chinese tradition, an elephant with an upturned trunk symbolize happiness and good fortune.

Or, atleast according to http://www.ehow.com/about_6514385_meaning-jade-elephant_.html. 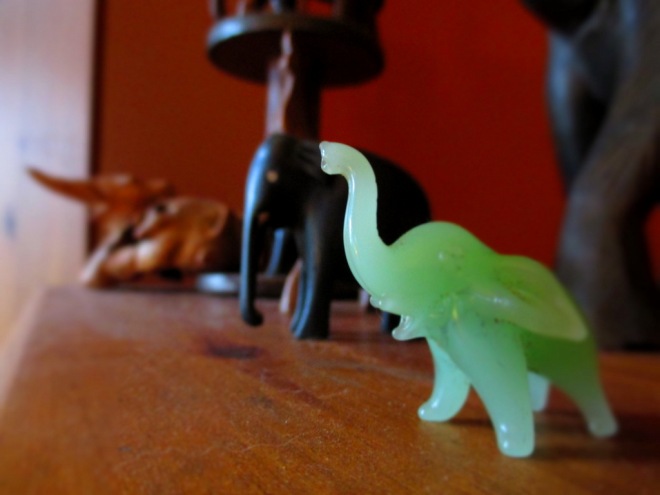 He told me, after it laid in the palm of my hand, that he’d found these two pieces last year at a garage sale – one little jade Buddha, and this elephant. My Elephants are the first thing one sees upon entrance to my world here, inside my in-between garden.

Do you think Mom he knew what it symbolized? I wonder if the reason he didn’t give both pieces to his Buddhist friend, was due to him not wanting to give her the wrong impression? He likes her, but not in that way. She’s the one who’s Buddhist New Year BBQ I attended.

I admit, at one point yesterday about an hour after he’d left, I had a little breakdown. A tiny one. Miniscule really.

Little salty splashes dropped from my eyes, and I flopped down upon my bed, and almost succumbed to the wallow rising up within. Touch and go there for a few.

And than, staring at the ceiling, I thought WHAT THE HELL AM I DOING? AM I NUTS? Mantra echoing again and again to myself F’him.F’him.F’him… and whatever he wants, or doesn’t want. No more minutes of this precious life will I be wasting pondering possibilities, when I could be enjoying what I already have. And so I got back up and proceeded with my delightful day of do.what.ever.the.hell.I.want.

Ordinarily, with far less prompting, I would have found some guise to wander over to his place, or wander by at the very least. But nope. I didn’t budge. I know I was right to turn away.

Ah Mom, who blawdy knows what that man is up to. I swear, they can be so confusing, ya know? They are so often very, very wishy-washy when it comes to how they feel, or what they really want. Geesh, make up your mind already. Eh? Shite or get your arse off the pot…move along…go away. As they always say…

If you love someone, set them free. If they come back they’re yours; if they don’t they never were.

I don’t want to live with him – maybe not now, maybe not ever. But I like him, but I don’t NEED him.

I’ve learned (the hard way) it’s never worth it to hold someone back. And good lord, who wants a begrudging have to go make an appearance at the girlfriends visit? Which is what was beginning to happen, and that really sucks. He was making me feel needy, and that’s when I realized that this wasn’t working. I’m familiar with THOSE feelings…back in my Helium Sphere filled days of yore with the ex.

You know Mom, maybe he’s just being cruel? Testing me? Just trying to get a reaction maybe.

Well, anyways, I was always trying to hold on too tightly to things you know. Often trying to force things into doing what they may not want to do. Like that old Siamese of Grandma’s. Poor Whiskey. I recall your reaction when I stomped into the kitchen {after one play session where I’d tried to shove him in the culvert out front} “well Paula, perhaps Whiskey didn’t want to go in the culvert? Now come here so I can wash those cuts with peroxide“.

I guess when he called on Saturday he was on his way to the East end’s Fringe Festival. He said he booked it out of the village, guess he dislikes the Gathering. Well, him with his fringe, and me with my gathering.

Now he has the desire to let me in on how he spends his day? Not when he bolted to Port Burwell, and came back with the epiphany that he just HAD to move there and become part of their groovy scene; of which I said I thought London could adopt, as this place is sorely lacking in good live music. Whatever. Go where your heart leads.

But other than these mild diversions, I really did enjoy my weekend. This little garden is really coming into its own this year, and it makes me proud to look around and see what I have created. Using just what was available…dead cedars and broken pots…and what little gems I’ve brought home with me to plant, it is becoming quite lovely. A place to while away the hours, conversing with the flowers, listening to the wind, underneath the shelter of this magnificent tree, standing alongside this village crossroads.

Lots of mojo in this place you know Mom. Lots of it. Lots of good stuff, and good soil. Not everything grows underneath a Black Walnut, ‘cept apparently for all the things I love anyways. I love these little in-between sort of gardens. Between here and there, and often one has not the room, or desire, to stop and admire. Yet, this in-between is all I have, and so I have made it my own. I guess one could say I have dug up out of the soil the gift of my own happiness, carved out by me, for me. Maybe to share with someone? Maybe someday. Maybe.

Maybe in the meantime I’ll just appreciate these unexpected moments, and savour the taste of them, the way they sound, and how they make me feel. Maybe that’s the important bit, eh Mom? How DO they make me feel? That’s what I need to find out.