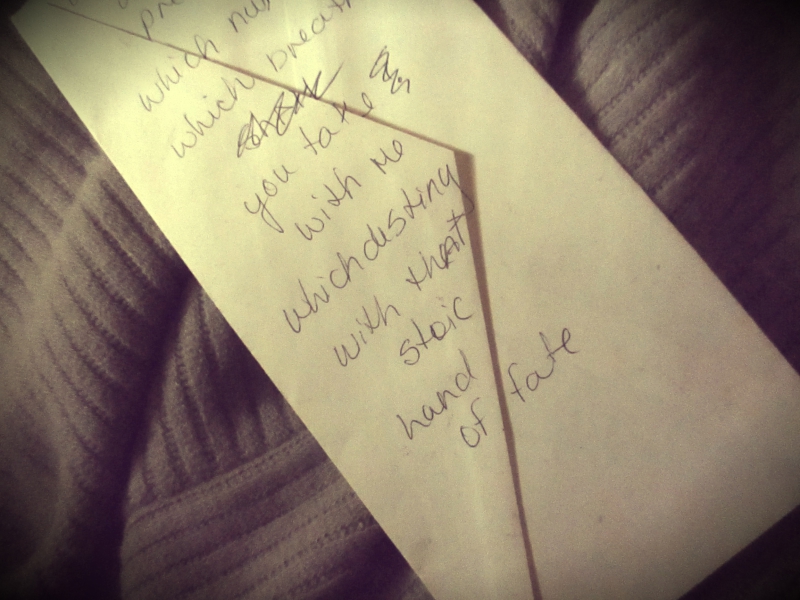 The words scrawled on the envelope, read:

which face
doth I present?
which nuance
which breath
you take
with me
which destiny
with that stoic
hand of fate.

Being a rough draft of one of my poems, and he says I got your note, I’m leaving, upon my returning from walking the dog.

He said he would take about 45 minutes, and he was early, and Irish had taken her sweet time, sniffing every drop of pee along the way around the block. Well, and I was taking my time too, lookin’ at the stars.

I don’t know what he thought. I said to him, in answer… that’s just a poem. Like, what did he think? I’d left this cryptic note to say…what?

He said he had come in the door, as it was open, looked around and found I wasn’t here, and turned around and saw that envelope, with those words.

However he sat down, he was rattled, and he seemed out of breath as somehow those words had meant something more than what I intended.

Just a poem that made him want to leave.

Still, I really don’t know why, as he is so cagey with his emotions, so cards close to the chest kinda guy. Not going to give you more than he wants you to know, or thinks you need to know. Always keeping, even those he loves at arm’s length. You learn sooner or later that is the cost of being his friend, take it or leave it.

Most, well, it astonishes me, but many find him charming, disarming, and amusing. While others loathe him; he’s just that kinda guy.

He’s arrogant, and self-confident, highly educated, reads lofty works of literature, works with his hands, and can at times be a complete and utter pain in the…em…bum.

He can be pretentious, his politics are hair-raising, he says completely outrageous things, usually, just, I believe, to see the look on your face. He likes to mess with your head. It amuses him.

He asked me once if I read Bukowski? I stumbled (that was my downfall), and mumbled yes, I read his poems.

He’s like…meh…that doesn’t count…. and I so wanted to poke out both his two steel gray confident eyes.

He often tries to bully me, and I quip back and have become sometimes a little ruthless…but I can see the respect twinkle in his eyes.

He once said…what really messes me up, is that you go toe to toe with me. And I say: I knnooooww !!!. And I do. And I know it scares the bejeezus out of him.

Yesterday, as we were slowly making our way through what the heck is going on, he said “Paula, please do not become stoic, like me. Promise me you won’t do that!“ Which was the coping mechanism he used 20 years ago after his baby daughter died, and just never turned it off.

And I said “no, I could never be completely stoic. Never. it is just not my way”.

And I also am learning that his character sometimes seeks only to obscure the symptoms of his broken heart; the real one, and not just the metaphor.

I feel things, unlike him, who has chosen to utilize his brilliance to teach himself the fine art of turning off, and maintaining that ever stoic countenance. Oh, yet on occasion I do glimpse them, once he has finally withdrawn his guard, and relaxes here in this Temenos I’ve created for myself.

Maybe I am a sort of haven, a place of truth, where he can speak of death and dying, life and living, and even, maybe, once in a while, acknowledge that he feels things, needs things, and still wants things for himself.

You can not hide from grief, or loss, or dying. This I know.

You may shove it aside, within some closet you keep the remnants of the tragedies of life. However one day that closet will overflow, and all the bits and pieces of our messy lives will tumble out and FORCE a purge of whatever does not serve.

I scare him, fine. I get it. So why does he keep coming back?

Ah, yes, the challenge. I so understand that need for someone who you can challenge, and to be challenged by. It is as addictive as any street drug or other vices of choice.

We have danced around his death. We’ve poked at the corners of it, stared at it together, honestly. He has joked of things that I can not repeat, for which to repeat would never give you the subtle glance I see, as he utters the most horrible things, for shock value alone. Horrible ways to end the dance he now finds himself upon.

So I smile and shake my head.

I’m not dumb. I see what those grotesque scenarios he sketches concerning his death represent. I see what fear those cavalier words mask. Of fear of not death, but dying, becoming weak. It masks a certain desire to create, for the sheer hubris alone, a spectacle of his own demise.

Stoic. I don’t think I could ever be more stoic than I was born, with all my seriousness creating for me a lonely childhood.

And so he challenges me. And I look deeper inside, and all the tiny remnants I may have forgotten I’d been dragging around in my ‘gunny sac’ are exposed.

“I travel light“, he quips.

Yet, I still don’t know what he thought that note meant.