How I Became A Vagabond Mouse

So the other morning I’m on my way to work, passing by the elementary school here in The Village, and I am all of a sudden cross-legged on the floor of the library, head buried in this book I discovered. It was, oh, maybe 20 years ago now and this was my second co-op towards becoming a Library Tech. I had been putting the books away when I came across it. Hadn’t seen it in years. Actually, had completely forgotten about it until that moment I grabbed it from the stack on the trolley and was about to set it alphabetically back on the shelf.

Sylvester, the mouse with the musical ear
Book by Adelaide Holl

Some little girls dreamed of being the princess, others Doctors, Veterinarians, Ballerina’s, I wanted to be Sylvester.

I wanted to travel the land inside a musician’s guitar, to pop out, like Sylvester, and sit by the fire while the strains of the guitar fill the night, as our campfire crackles away the darkness. It seemed to be the perfect way to be; footloose and fancy-free.

That displaced country mouse, his home destroyed to make way for a highway, happens upon the music shop near his lost meadow, and so he comes to find himself on the road with this travelling musician. Even now as I was looking for images from the book, I am again enchanted by its illustrations, by N. M. Bodecker.

Strange how these memories go, eh? One minute you’re in your nice and cozy world, heading off to work, and the next I’m 7 years old listening to Mom read my favourite book to me, imagining myself as a mouse living inside someone’s guitar.

I come from parents with a history of ancestors living in the same place for centuries – both the American and Canadian sides. Of a people who generally are born, grew up, married and eventually died in the same place, with few exceptions (my Dad being one of those exceptions). Aside from those ancestors that first took that great journey across the Ocean to North America, I would be hard-pressed to find an ancestor with the same adventurous spirit as that mouse. I come from very rooted people, salt of the earth farmers, living on the land of their forefathers’ fathers, sweat equity their reward.

It got me to thinking about the choices I’ve made over the years, and how I now see that many of them, moving away to Toronto, going to Australia when I was 19, my sojourn up at the Lake with Tim, and maybe even my love of cycling, all now make perfect sense – I have always wanted to be free, to be the rebel on a great adventure to anywhere, quietly riding along in someone else’s guitar.

I had a fellow BealArt student I used to run into all the time at music festivals in the summer. I’d see his distinctive blue and white polka-dot hat bopping along somewhere in the crowd and would know it was him. He was a painter, and lived by his brush, only taking odd jobs to make ends meet. The last time I saw him he was selling everything that wouldn’t fit in his backpack and on his way by bicycle to Florida. I was wowed by his spirit, and his faith and strength. To be able to just get up and go whenever one feels the notion, to have so little that ties you to a place that you can just leave, maybe never come back.

It is a completely foreign concept to me. I have always had too many things that kept me grounded; or thought I did. As much a “tea towel in the wind” that I can be, in reality, I have not ventured as far or as wide as that mouse from so long ago.

When I first moved out with my girlfriend at 19, within a year of us living together she asked me if I wanted to move with her out to BC. BC of the majestic mountains and gigantic Red Woods to many Canadians is an oasis of free thinkers and a province for those of the adventurous spirit, but I couldn’t do it. I couldn’t at the time give away my cat, sell my stuff, and move West. It still seems like the incredible journey to me.

Or so I thought.

Yet, when I look back at all the choices I’ve made over the years since I moved out at 19 years old, I now see that in fact I have often tucked myself up in someone’s guitar case and travelled along with them. Metaphorically at least. It is in that spirit that Tim found me, displeased with how life had given me the bum steer, with my Divorce and the death of my Mom. How I felt that even Toronto was not far away enough, and so he took me up to his Lake, and for a while, I was almost so far away I could not so easily return. I often remember sitting at that kitchen table, looking out at the beauty of the calm lake, drinking my morning coffee before Tim had awoken, wondering how on earth I was going to get away from him, how I was going to figure out how to get the courage to reach out.

We never had a lot of money, and I admit my love of the place, well, it kept me there for longer than it should have. I cared for Tim, sure I loved him, but he was a master manipulator, a narcissist I now understand, and I was stuck in my mind; not bodily. The only chains that kept me in place were those of fear and pride.

And with his death by cancer I was released, and after his ashes were buried, after that long winter on my own at that Lake I loved, I finally returned to my home. After over a decade away, and to the one place I had always wanted to be, right at the heart of this Village within a City.

I’ve for the longest time thought I would have disappointed that 7-year-old who’s ideal was a vagabond mouse. That I had not indulged my adventure-loving child within.

Actually, I think I’ve always somehow managed to “tread where Angels fear to go”. I have been taken off on adventures, and have taken off on them all on my own. Even if I have often felt tethered, I have also managed to stray from the path, ventured off into the wilds, explored the edges, gravitated to the fringe. I have never desired a suburban hum-drum-addy life with a life mate, 2.5 kids and a two-door garage and neighbours who only know you by name, all safely tucked into a white picket fence life. So I guess it shouldn’t surprise me that I have the friends I do, as there are those of us who just do not fit in those white bread neighbourhoods of sameness. We do have a tendency to find one another, like homing pigeons, we seem to eventually find others of our kind.

I do not feel comfortable with the small talkers with their credit cards and mortgages. The set who rarely venture off the path, who always take the well-trodden way. I want to be with the artists, and free thinkers, the carpenters, and the guitar players who live by their craft. Sometimes living vicariously through their adventures, my adventures have been of the mind, if not always the body.

Last night, sitting there in D3’s cluttered woodworking shop, covered in sawdust, the wood stove burning away and I’m taking pictures of him working so I can post the shots on the new website I’m making for him, and it struck me that I have not disappointed that child inside. In fact, I kind of felt a little like Sylvester, sitting there watching him create this beautiful thing from scraps of wood he found at the side of the road.

But when I was going to work the other morning I felt a little disappointed in myself, that I had not had the courage to go off on more adventures. Yet, it’s all a matter of perspective.

Sure, I haven’t travelled the universe, yet, yet. It wasn’t just the adventures of Sylvester, though, that I loved, it was also the person he found in that travelling musician.

You know, D3 is amazing at living in the moment, and for him, it was never a choice, not really, he was always a carpenter, and his adventures, much like mine, have not taken him too far afield.

Whether we’re sitting around his clutter table, or within his workshop, whether his hands are caressing the wood or the strings of a guitar or mandolin (as he can play both), I am that mouse with the musical ear, sitting listening to the crackle of the fire. These vagabonds at heart, you know, these left of centres are my people.

I was always Sylvester. 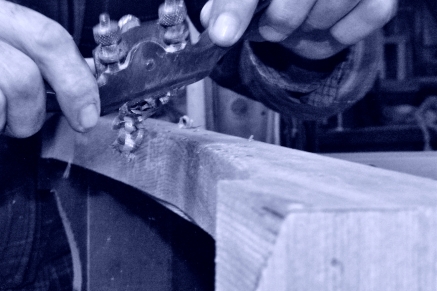