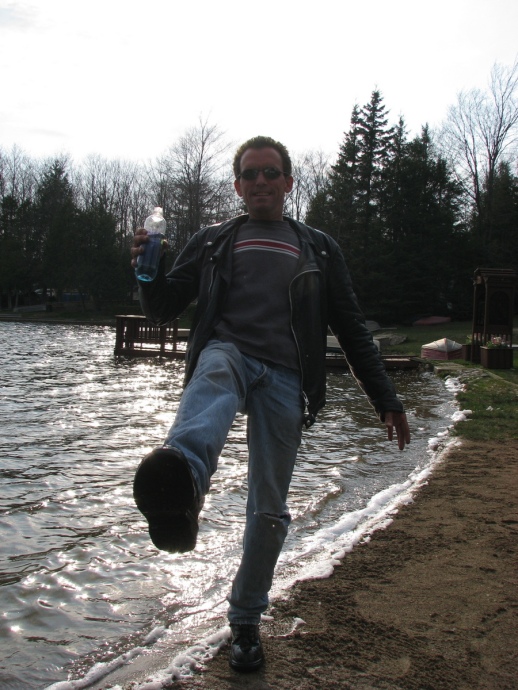 Back before the four-square Boho Lake Days, back in the city, Tim’s world was musicians, bars, and back doors. If you wanted to find me, once I met him, that’s where I was too. Right by his side – glued. I was enamored with this world, and Tim knew it. In a way I believe that’s what attracted him to me, initially. Like a fly to honey, me and music have a keen attraction.

That’s of course not the whole story, but that’s the part I’m working with today. What has been on my mind though is an Event coming up across the road. A certain musician will be featured, and this guy {lets call him Jack} and Tim have a past. If what Tim told me is true, and I have a hard time trusting anything he told me sometimes, this Jack and Tim went back almost 25 years. I’ve seen pictures, but that doesn’t prove anything.

Once we were stationed permanently at the cottage, almost all interaction between us and that world, ceased. Frankly, I don’t know the instigation, or if Tim just really did want to escape to the Lake with me and get away from all that. Both could be equally true.

So, a couple of weeks from this Sunday Jack will be back, and right across the street. I can’t even describe to you how that makes me feel… because I’m not sure even I know that yet. I’m still debating wildly on whether I should go over or not. Should I just leave well enough alone? Walk off into the sunset, and ignore that world of Tim’s ever existed? That world of lies and lines, its way back before, and maybe I should just keep it that way. Preserve my memories, and just leave well enough alone.

I guess that’s ultimately what grieving is about though, that letting go of things that maybe unfinished. Tis but one of the painful aspects of Tim being gone; all those unanswered questions.

Tim always called Jack, and Jack’s girl Jill, “our” bestfriends. I questioned that, though silently.

I was like really? Best friend? Not that Jack’s a bad guy, but no, sorry Tim…”that’s BS and you know it. He’s a friend…but your lying to yourself if you think he’s your “best” friend.” Geesh.

To Jack, Tim was almost like a “subject”… in Jack’s world, they were not equals. Course, Jack thought a lot of himself, once having a Top 10 Canadian hit in the 80’s or 90’s. Ego is the bread and butter of all musicians…which I’ve found out is just the cover they use to hide their tortured psyche.

Jack’s backstory is somewhat complicated, but in a nutshell…the woman he thought was his Mom turned out to be his Aunt, and the woman he thought was his Aunt? Yup, you guessed it…turned out to be his alcoholic/drug addict Mother who gave him to her sister to raise. So in a way, in a twisted way, it is sort of ‘right’ that they were friends…I will give them that.

Though he disappeared, and as far as I can tell, I don’t think he cares. So why on earth should I? See, this is confusing. Unfinished business. Let sleeping dogs lie keeps ringing in my head.

So, there’s that. However, to balance that I actually found my Neil Young ticket stubs, from Dec 4th 2008. I had bought the tickets way back in the early summer, with no clue who would go with me, all I knew is that I was going. Well, as it turned out, Tim came with me.

Also found a couple of pics from that night…and these make me smile. I LOVE Neil. I love his authenticity, and his integrity. I may not agree with everything he sings, or gets involved in, but I admire how he always does it with his whole heart.