I was asleep when the phone rang, when the nurses at the hospital called to say, “its time”. So about 20 minutes from now, as I write these words, 20 minutes and 5 years, it will be.

And how time has danced by, with new friends, new home, new me.  I received the anniversary notification last month, which marks the day I registered with WordPress, but the first post didn’t happen until October 26th of that year, 2012.

In those first days after, grief gripped my voice every time I said his name, every time I had to tell someone he’d passed away. So I blogged through my grief.

It started simple enough, but it became more. It became more than  the cottage, the lake, the woods, the gravel roads, the Alpaca’s, the old railway trail we found one hot summer day, that I returned to again and again, way, way back there in Never Neverland.

But here I am, writing still, but on this new little Chromebook, at the crossroads of this fair village within a city I’ve always wanted to live within, sitting here in my little snug, in Tim’s big wicker chair, across from Grandma’s velvet settee I’ve dragged everywhere over the last decade or more. And when I return home, my reflection in that antique glass of the mirror greets me. That long green credenza-like dresser we were given by neighbours, well it’s packed to its backboard with as much as I can stuff in. Irish now is asleep on the bed, the same mattress, you know, that Tim and I shared those last days of his life before he chickened out and escaped back to the hospital in town.

Dying’s hard, and I don’t blame him. It’s painful, and stubborn, and takes things from you, more than just life, it takes it’s time, sometimes dignity, and sometimes the control that once predominated, the iron-grip of lies and illusions are laughed at, thrown aside, like toilet paper. And hospitals have better drugs.

He didn’t last long once he’d made it to the hospital, but I refused to sleep there in the room, waiting. For that’s all it would be, and I just couldn’t do it. Couldn’t. Wouldn’t. And that hurt him, but it felt like ants crawling up my spine to be there. It felt like someone had a grip of my lungs, pushing at the valves of my heart, with my thoughts pacing those dark hospital corridors, nothing to do, but wait for it to be time. Wait. However, we didn’t have long to wait, things you dread always have a way of coming quicker then one would like.

So, here I am, watching the clock, tick, tock, as I was actually up this morning at 4AM, but it didn’t occur to me, till I gave up and decided to go make coffee, nope, didn’t occur to me at all what day this was. Till that first sip had reached my throat, the realization. Five years.

You know, I couldn’t even listen to my iPod till recently. All that music was the soundtrack of summer after summer, and bonfires by the lakeside, listening to Coyotes yipping across the dark waters, illuminated by the billions and billions of stars, dancing on its surface. Neighbour up with friends, guitars strumming ditties we all knew, laughter, lawn chairs ringed round, coolers at the ready, full of libation. Mornings at the kitchen table, watching the birds, as the dawn rose over the cedars that ringed the lake. Walks back behind the cottage, past the Hungarian Hall, out onto the road that now probably has cottages that line that part of the lake; there were just for sale signs back there 5 years ago.

I miss all that.

I miss those hidden back roads that lead to magical places, and those Alpaca’s with their goofy faces. I miss cresting the hill with Irish ahead, just the two of us, after those days of waiting for his death.

I miss the thousands of dollars he took from me. I miss the trust I had in humanity. I miss the security of my line of credit, and my credit cards. I’ve adapted, and truth be told, I think maybe the experience did change me for the better. I learned from him that people don’t really pay as much attention to the details, certainly far less than I once did. Sure, he used his knowledge for ill, but it taught me how to be less introverted. Far less all-consumingly self-aware. 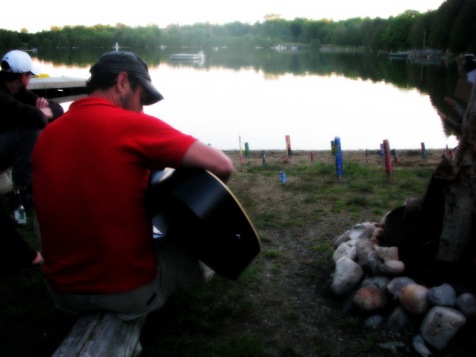 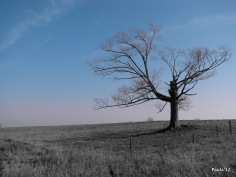 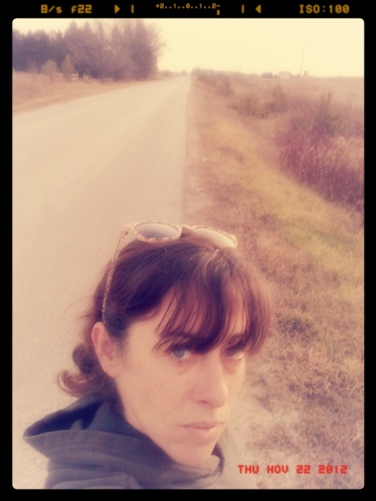 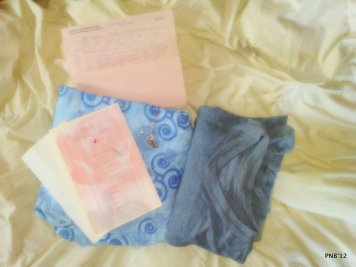 And, I thought last night, that thanks be to whoever arranges these things, but thank god that first tooth fell out way up there. Facing one’s fears, like waking up with a tooth on your tongue instead of where it should be, well it doesn’t sting as deeply. It all changed me. All of it. I no longer weep, certainly not for lost teeth. It was always coming. Now I hardly think of them. I am humbled, but I’m content. I have a dental plan. I am more patient, I get angry less, I actually smile more too, go figure that, toothless grin and all. A grin that maybe no one but me really understands, but facing my fears is a smile that would have scared the crap out of me not long ago. I suppose my concentration now is just on other things. But I dress well, he made certain of that.

Well, truth be told, I am still cautious with those smiles, but they happen now much more frequently.

Maybe he took away all the security I gathered close, all the things that buffered me against what I was, who I was, what I wanted to be. He ripped off my mask, and with no remorse, stared me in the eye, and, well, metaphorically,  whispered to my soul: “you are weird like me, deal with it”.

Day by day, these past 5 years, I dealt with it.

So when I came back to the fold, when I arrived back here in my hometown, that Paula I had once been was gone. She had a missing tooth (hidden back then), and dyed hair. She wore clothes a dead man picked out for her and blessed be, she didn’t take the addiction to his Peruvian marching powder.

Today, the missing teeth are not hidden, the hairs not dyed and it’s long and flows down my back. I dress well and have a fine collection of scarfs to drape and tie for bling, and expensive jackets he found at Garage sales, with an eye for details I am still astounded by. I do not look the toothless sort, and I imagine it surprises people, and I like that. It makes me vulnerable, and saw a TedTalk by Brene Brown who said, “truth and courage aren’t always comfortable, but they’re never weakness.”

Yet, for everything he took away, has over time been replaced with things no one can steal. For all the security he took, I made do with the realization that all that is mere smoke and mirrors. True happiness is not things, happiness cannot be bought on credit, nor held to close. Credit only gets you so far.

Simplicity is the mantra – happiness comes like the sunshine that glances past the walls of this old Victorian, hits my ferns, dancing off the giant Plantagenet Hosta’s, with their gorgeous crystal white lily blooms. It is the heady scent of Milkweed that drifts across Euston Meadow, as I pass by on my bike, well before dawn, to a job where they call me “mighty mouse”.

Happiness is realizing one has become a collector of bikes, and pathways that lead to magical places can be found right here in my hometown. It is the sunshine glinting off Irish’s golden coat, as she romps up the path before me at the coves. It is the wind in my hair, as I cruise down the Thames Valley Parkway bike trail that runs along the river through town, with my bike guy, that Crossroads Man I still don’t exactly know what to make of; but is weird like me, so that’s good. He doesn’t care about all the things I don’t have, and he feeds me steak and potatoes, as we dine among the chaos and his collectables, listening to Tom Petty’s greatest hits.

I can listen to that iPod now and share that giant collection of tunes with friends, as we sit around a bonfire, drinking beer, laughing and reminiscing on “when we first heard that song”, as nothing on it is post-2007.

But I miss it all sometimes, even him. I did, after all, love him, as much as I loved his lake and all the wild things that surrounded it. It spoke to what was at his core, and I still wonder who he could have been, should have been, and why he did what he did, was who he was, and lied about what he lied about. I still do. How does a narcissist come to be? Are they nurtured? Or was it just his nature to be a conniving piece of shite? Who knows, I certainly don’t.

Perhaps the greatest lesson from it all, probably the one thing that all the other things hinge on, is that I am no longer afraid to be alone. I have come to embrace solitude, and I found that peace within myself that I never knew was there.

Five years ago, today, he died, and that has made all the difference.

3 thoughts on “Weeping And Dancing And Grieving And Leaving”