At some point I just knew. She showed up at our door that wintery January 1st eve 2010, and my life has not been the same ever since. Irish is an answered prayer.

Like so many dogs, one minute she can look old and wise, and the next just a puppy, and stupid.

She always, always greets with exuberance – EVERYONE {whether I agree or not}. Although if she REALLY likes you, ya get an Irish Hug. Which has become the term we use now for Irish’s tendency to hump. If people would just quit laughing, my training would go a lot further I think. 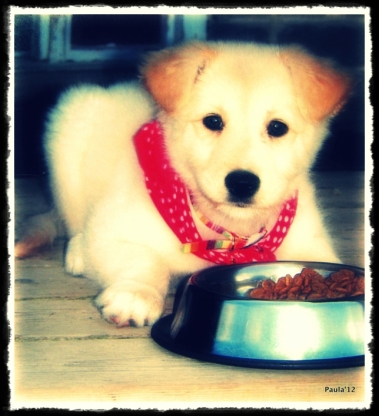 The year she arrived was to be one of great upheaval, and as it turned out, a few more painful years followed – she was a gift. And there she was, that winter eve, right at our window wrapped in a thick layer of snow. In her eyes was a tinge of fear, she was anxious, and a bit of “this is super fun guys, but where am I“?

She wakes me up in the middle of the night sometimes, and I never know why. I must be talking, or crying, or … who knows. I really would love to know why. I don’t remember my dreams, so I have no idea. That world is hidden to me. Or, it is just as likely I’ve forgotten to fill up her water dish and she’s a wee bit thirsty {bad mommy}.

I grew up with many dogs. Grandma had a Weimaraner, we had Dobermans, and of course the farm dogs down at The FARM (where GrandmaD grew up).

When I was married we had a great big galoot named Mogan, a part Shepherd, part Rottweiler, part MOOSE. I trained her, I walked her, fed her, but she was my ex’s – I made sure of that. He’d never had a dog, never known what it was like to be loved unconditionally, and he was more than due. So she went with him.

Turning my back on Mogan was difficult. I remember at the time fantasizing about someday being able to have a dog of my own…someday. 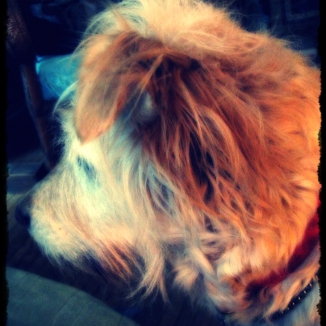 Here we are, almost 15 years later, and I be blessed with this Irish lassie. Fluffy and golden, with big Milk Chocolate Kohl lined eyes, she really is an answered prayer. I gush, I know. Ya all must be rather tired of her. Yet I never am. Dogs just seem to fit in, adapt, mold themselves to the world you inhabit.

The other day, as I stood at the window watching her, I couldn’t help but admire her vigilant desire to guard. She is a watcher, this one. She sees all, nothing gets past her eye. She is ever on the look out, for dogs, bicyclists, runners… crows… and other things she deems questionable.