When I first met Tim his life was about drugs, music, late nights and alcohol – and it was that life that ultimately killed him.

I’d always been attracted to the music scene, and still love the energy of live music. Thus it was that I became entangled in the life he led. Yet, in time I realized that Tim’s life was not out front, but rather out back supplying the musicians and groupies with their candy.

I’ll be honest, I’ve written of this aspect of Tim’s life previously, YET I do feel compelled to protect these individuals that we associated with at the time. It is not my place to open up those doors. So how does one write of this, and still maintain the veil? I’m not sure, but through this post I will try.

Even writing this piece is walking that fine line between silence and exposure. In a real sense this blog has become my sketch pad though, my therapist, and my book of secrets, so tis here I turn when I need to work things through.

Thing is, Tim was a drug addict, an alcoholic, a thief,  and a liar. The people who knew Tim know this, and I’m not exposing anything they don’t already know. These weren’t aspects of his character that were secrets {except to me} as I discovered, but only when it was far, far too late. Not one of those individuals warned me, but I suppose I shouldn’t have expected them to. Frankly, I was very naïve. Plus also after a time, if I’m honest, I was also in denial.

The Tim I met was popular and everyone seemed to LOVE him. He was a quirky character, spoke his mind, and seemed to be the guy everyone went to if they needed a kind ear or a shoulder to cry on. Many of these people knew ALL the things he had done, and who he was, yet they still loved him regardless. This is the Tim I first met, and this is the Tim I fell for.

I won’t rehash the whole story line, but eventually that life became way to much and eventually we ended up moving to his family Cottage northwest of Toronto. You can say I came along and took him away from that dangerous scene, but he wanted out as much as I. It eventually became one tiring night after another- riddled with lines and lies and people I just didn’t particularly trust. I wanted out, he wanted a change, and so we eventually left together. 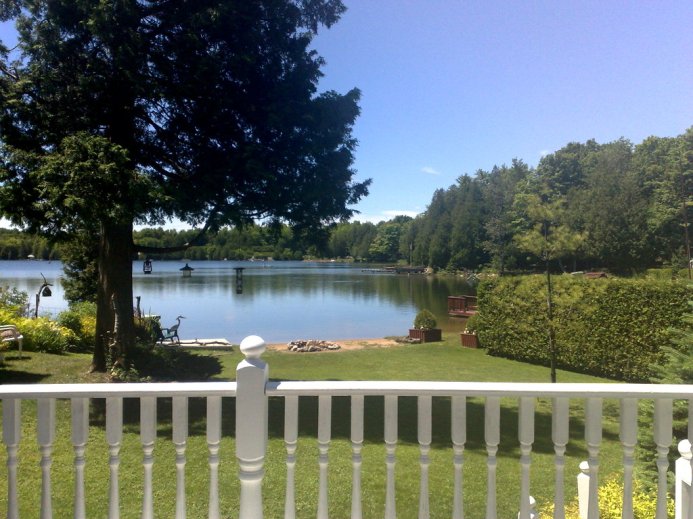 Tim’s heart home was always waiting for him, and it was to that place we escaped. Situated on a lake, amidst the natural beauty of Grey County, that world of drugs and late nights were replaced with campfires and walks in the woods…and slowly Tim’s addictions dissipated. It took approximately two years, give or take.

Cocaine is a difficult addiction to break, especially when everyone who surrounds you treats you like some god in order to get a line of it. I look back now, and I have to wonder how many of those “friends” really did love him, or love what he could supply? I guess I’ll never really know, since the last time I saw any of them was in 2009 when we escaped to Tim’s lake.

Quite frankly, I’d like to keep it that way. The whole scene still scares me, and I have no more inclination towards the whole business than I did back when we left. By writing this I may just be permanently shutting doors, maybe making enemies, but so be it. That is not a world I want anything to do with anyways.

Last October, 2013, I was curious what some of them were up to, and so I took a look at a couple of sites that gave information on future concert dates. One of the dates stopped me cold – October 18th – the first anniversary of Tim’s death. It was being held in the city where Tim spent almost 20 years of his life, when he was with his ex-spouse. I to this day really don’t know the truth of what happened with them, but I imagine some of it had to do with Tim’s lies and drugs.

The only people who came to Tim’s funeral from that life was his ex-spouse and her daughters. The others didn’t come, because I didn’t call them, as I wanted absolutely NOTHING to do with any of them. Especially not then.

While I do not at all blame them for Tim’s addictions, I was in a precarious place mentally, and I really couldn’t handle seeing them. Also, I had no desire to have them within that church. It was Tim’s Dad’s church where the service was held, and their world did not belong there; besides, we hadn’t seen any of them in 4 years.

At first I felt alittle excluded when I saw that concert date being held, but only briefly. Tim’s ex spent 20 years of her life with him, and god knows I have to admire her for her loyalty. Tim was by far one of the most difficult people I have EVER known. Love is deaf, dumb and blind.

Piecing it all together now, I know that for apparently 14 years Tim had kicked his cocaine habit. I believe now it was probably his Mom’s death that eventually contributed to him slipping back into it. Her death I know hurt him deeply, and I suppose the lure of oblivion and ecstasy that that horrible Peruvian marching powder gives, was just too much to ignore.  He hid it from his ex, but in time I’m sure she learned the truth and I imagine after a while she’d had enough.

On the day of his funeral, as I walked with Tim’s family back down the aisle after the service, I could see the tears and deep grief she was feeling. I can’t imagine the pain she was in. What a dichotomy of mixed emotions she must have felt at his death. She had spent almost 20 years or more with him, and he had been like a father to her young daughter when they met.

Today I recognize that saving him from that world was never my role. Rather, I suppose my role was perhaps to keep him from it. The cancer that eventually killed him, was I imagine there right from the moment I met him. Once the drugs and alcohol that had littered his system were finally dissipated, the pain that they had been hiding finally became apparent.

In December of 2010, Tim spent days, off and on, in the hospital with various doctors trying to diagnosis where the pain was coming from. The whole time, hidden behind his stomach and intestines, sat his killer. It wasn’t until September of 2011 that he finally learned the truth – Pancreatic Cancer – the most deadliest cancer there is.

There are perhaps many who question why I stayed. Not at the end, but at the beginning. Why DID I stay? Even once I learned more of his lies, and all the rest of the BS he shovelled…after I learned he had stolen my savings, and lied about so many things… why? I can’t answer that, but to say I felt compelled. I loved him… yet…honestly, I don’t know why. What I can say though, is that the rotten stinker was damn blessed I did. Someone I guess took pity on his damaged soul, and in the end, I helped him through those last four years of his life.

I rage sometimes at how my life with him almost destroyed me. He took a lot from me, but still I held fast, and stood by him to the bitter end. The truth is, Tim was not a bad person, he just did bad things. He was caring, and loving, and many counted him as a good friend – even to this day. Yet his death was painful, and long and very difficult. He’d made many mistakes in his life, and in the end he paid for the life he had chosen to live.

Why I came along when I did, I guess I will never know. Perhaps though, even with all the mistakes, he had been a good friend, a caring human, and I suppose he’d saved up some karma points. If I had not come along he still would have died, though probably alone in some hospice.

My life with Tim was hard, painful, frustrating, and aspects of it are even a mystery to this day. He lied, he cheated, he stole from me, and even almost dragged me into his world of drugs and addiction. In the end, I survived. Was I his savour? No, for he was long past saving. Maybe though, he saved me.

The person Tim met back in October of 2008 was scared, lonely and very depressed. I was without direction, my life was a mess and I was ripe for the picking. Today, I may be living cheque to cheque, I maybe overwhelmed and lonely at times, but I am not the same person I was when we first met. I am far stronger, and have learned to tap into that well of strength that lies within me.

So no, regardless of all that he put me through, in the final accounting, he saved me.

Yesterday being Valentines day, I took out the picture I keep of us together, taken it seems so long ago, and I said his name, and all these images flashed by. That world seems so far away now. So much has transpired between than and now. That world, the people, the lies, the secrets, they are in the past, yet so much remains unanswered. The Tim I grew to know, was not the Tim I knew when that photo was taken. That woman I see in that photo had no idea what lay ahead for her.

The person who sits here today writing this is a changed version of that person in the photo. Tim’s death, and that last year of his life, it striped me bare. When he died, a piece of me went with him, and its taken me this long to draw a little of it back.

The grief, the tears, the sense of loss, sometimes is still poignantly present. At times I teeter from anger at him, to love, often moments apart. Nothing about Tim was simple, everything about him is, and was, complicated. From the beginning, to his bitter, painful, dying breath…was a challenge. I often wonder though where I would be if I had not met him? Farther ahead? Certainly not where I am now. I can’t ever know, but regardless of all that he did, to me, I know I am a stronger person because of him.